A cursory glace at my Instagram feed will tell you that I have a bit of a thing for night photography. Two months ago I set myself a challenge to go out every night for seven straight nights (come rain or shine) to different areas of Birmingham city centre and come back with something interesting each time. Now I know this ‘challenge’ wasn’t exactly Tough Mudder or climbing Kilimanjaro but it did take a fair bit of motivation. While settled on the sofa in front of the TV at 9:30pm with the rain hammering on the window, I did question whether I really wanted to commit to this little internet vanity project (as was the case on Night 2). But a challenge is a challenge.

I don’t really know if it progressed my photography skills but it made me more comfortable going out in the evening with my camera which was huge for my confidence (even if I still felt like Jake Gyllenhaal in Nightcrawler at times). Here’s what I managed to come up with.

I’d been wanting to take something like this for ages and lights around the canal at BrindleyPlace (I think it’s officially all one word, I don’t really understand why) looked pretty special as the evening set in. It was also quite impressive how clearly the shot on my phone appeared on the final photo.

I had a few odd looks from passers-by on the bridge. I’m sure they all had spectacular nights.

The rain fell down mercilessly on Night 2. It’s a twenty minute walk from my flat in the Jewellery Quarter to The Mailbox and only an idiot would have gone out that night without the promise of a stiff drink at the end of it. I was that idiot.

There’s a gorgeous Victorian aqueduct that runs over Holliday Street and the reflection of the car lights made for a pleasing scene in the rain. I then trudged up to the Mailbox and only found silence, emptiness and the occasional person scurrying by with a wildly flapping umbrella. I called it a night.

There were obvious reservations about heading to Broad Street on a Friday night with my shiny new camera. Pre-conceived ideas of drunken ne’er-do-wells hunting me down in packs and chasing me up to Five Ways like a Benny Hill Sketch thankfully never came to fruition. I actually quite enjoyed walking up and down this notorious street stone cold sober and without any emotional attachment to the evening. People seemed to largely ignore me in fact.

I liked the photo of this guy in a hoody and sweatpants who looked the complete opposite to everybody else out on the town in their glad rags. He reminded me a little of Richard Ashcroft in the Bittersweet Symphony video.

This odd looking thing is nearby the legendary Mr Egg (which, embarrassingly, I’ve still never been to) and was just asking to have its photo taken. I guess it’s hardly representative of Hurst Street but it’s not something you see on every street corner.

A tiresome saunter around the perennially disappointing Arcadian yielded nothing so the little alien became Night 4’s shot.

I don’t really know why I came down to this stretch of the Queensway for the mandatory long exposure shot. I think it’s because I like how the road bends and the contours of lights make an interesting pattern. I should do more long exposures but I’m lazy and can’t be arsed to carry a tripod around most of the time.

Shout-out to the ska band who were playing nearby at excellent Gunmakers Arms during this shoot. Their raucous renditions of Specials tunes kept me entertained throughout. 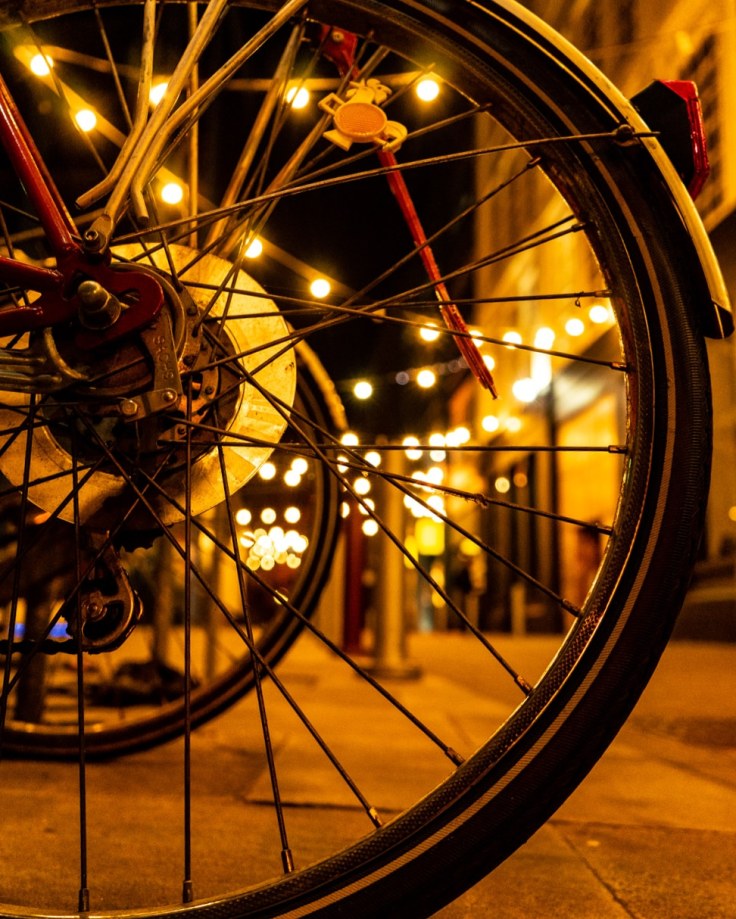 I know Digbeth appears on a lot of these ‘hippest places to live’ lists but let me tell you, walking down Bordesley Street alone on a Monday night carrying an expensive camera wasn’t fun. It was deathly quiet and not well lit with only the husks of empty factories and deserted car parks for company. It felt a little dystopian at times, a bit like in Back to the Future Part 2 where they go back to 1985 and Biff is now all the powerful millionaire ruling Hill Valley. A bit like that but without the chaos. Anyway, I digress.

There’s always these bikes parked up at the Custard Factory near the back and I thought it would look cool to capture their spokes with the hanging fairy lights blurred in the background. Floodgate Street has been done to death but there’s still loads of scope for that sort of shot inside the Custard Factory. 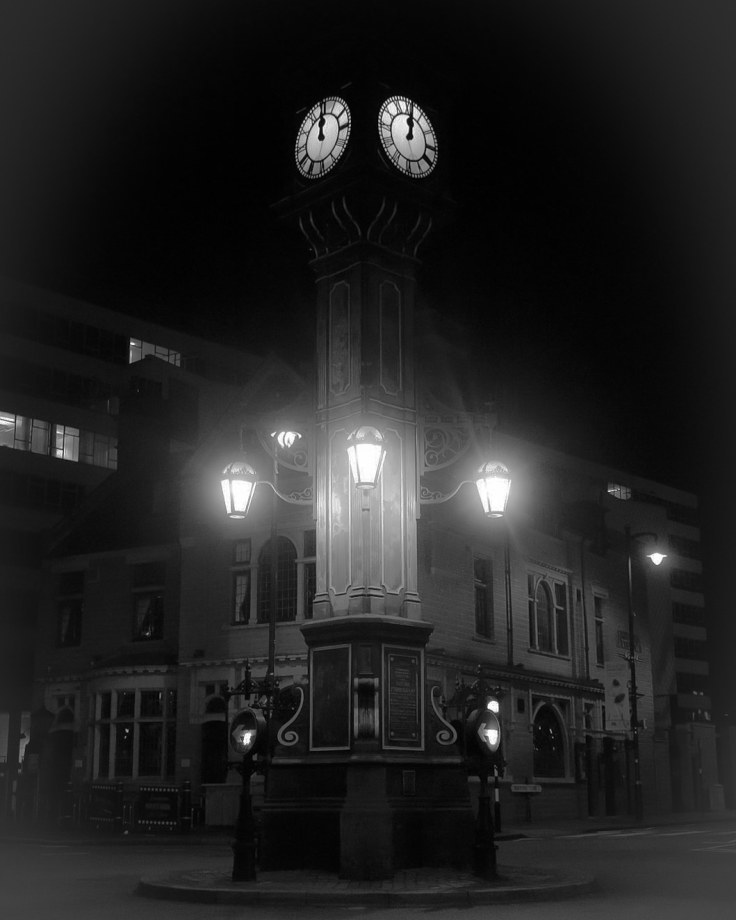 I purposely saved the last night for my own neighbourhood as it clashed with Aston Villa’s Playoff Semi-final clash with West Brom. I knew I’d be at least 4 or 5 pints deep by the time I had to come home and go out again to take the last shot of the challenge so it was a good idea to keep things local.

This was the best I could come up with as I drunkenly staggered around with my camera at 11:30pm. It’s quite hard to take a bad photo of the Chamberlain Clock on Warstone Lane. Putting it in black and white gave it an almost ghostly effect. Amusingly, despite my intoxication, this one turned out to be the second most popular of the seven that I put on Instagram. I don’t know what that says really.

One thought on “Birmingham – A Seven Night Photo Challenge”