It’s the smell that gets you. If your commute home from work is like mine and takes you through the small Livery Street entrance of Snow Hill Station then you’ll know what I’m talking about. Of course you could go back to the humdrum familiarity of your home but there’s this warm aromatic smell permeating through the ventilation inside the station entrance that is compelling you to change your plans at once and head straight to the source. Which way do you want to go?

Indian Brewery is situated under the railway arches of Snow Hill Station on Livery Street and is a heady mix of locally brewed craft beer and Indian street food. One of the attractions of street food is its accessibility and that’s a huge selling point here. Most Brits probably associate Indian food with heading out to a restaurant for the night or lazily ordering a curry in on a weekend but here’s a place that you can drop in on a whim, grab a pint and have their famous ‘Fat Naans’ in front of you within a few minutes. It’s tasty, hugely convenient and makes it hard to visit for just a the beer alone.

The menu is charmingly enticing and packed full of bites with names as colourful as the creations themselves. The food is based on traditional Indian home cooking with plentiful meat and veggie options alongside a breakfast menu and some interesting sides (good luck trying to find chocolate naans in any other pub or bar). The Chaat Bomb is a particular favourite of mine with its ostentatious pink and green sauces generously draped over veggie samosas with chickpeas and Bombay sprinkle joining in the party too. 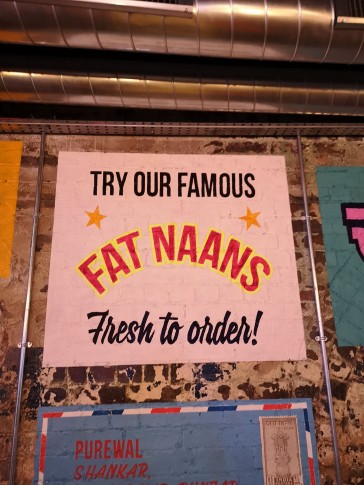 When staring at the menu of most Indian restaurants across the country you’ll often be faced with a desperately mediocre choice of beer consisting of one or two overpriced bottles of lager but Indian Brewery doesn’t have that problem as they brew their own craft beer nearby in Great Barr. A vibrant beer board hangs by chains in the window proudly displaying the healthy choice of cask ales and keg beers on offer with the locally brewed Indian Summer, IPA, Peacock and Bombay Honey taking pride of place at the top. A dizzying array of spirits are balanced slightly precariously on shelves behind the bar with a gaudy neon sign lit up spelling out the bar’s own ‘Birmingham Lager’ that looks every inch 2018. 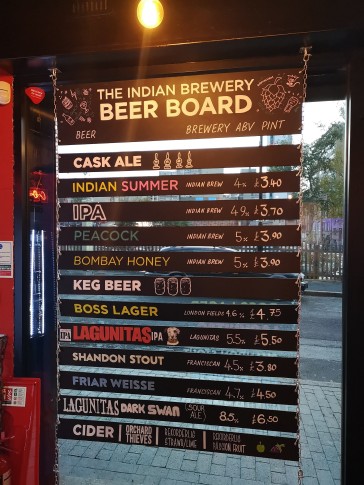 The kitchen faces out onto the seating area and as I walk through with my drink the cooks are smiling and chatting away, looking relaxed as they wait for the orders to come in. The back wall is decked with elaborate posters of classic Bollywood films with dramatic titles like ‘The Burning Train’, ‘Mother India’ and ‘Hero’. The bright red and yellow side walls are adorned with vintage and modern tin signs of various continental and American beer brands. Jaunty upbeat Indian music is playing over the stereo as I look out of the window and see a chalkboard on the pavement confidently proclaiming ‘GOOD VIBES ONLY’. The view outside is sadly mired by one of Birmingham’s most sigh-inducing and vulgar car-parks (of which there are many unfortunately) but behind it is the iconic presence of the BT Tower which returns some of that Brummie pride. 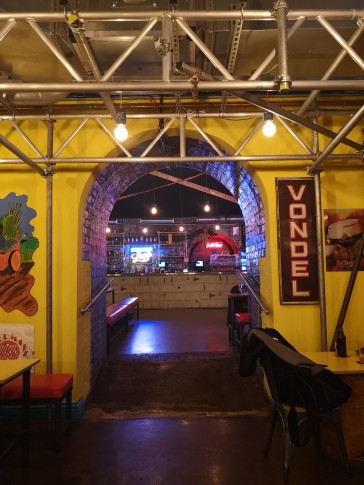 Not long after I sit down with my beer a middle-aged man in business dress hovers outside the window, squinting through the glass inquisitively and it becomes apparent that he wants to come in. In fact almost everyone who walks past turns their head to look inside. You can’t blame them.

Although it only opened its doors less than two years ago in January 2017 as an alluring yet rather sparsely decorated spit-and-sawdust sort of place, I don’t remember seeing any other Indian street food places around the city. Perhaps they should make more of a fuss about their pioneering status here but they’ve got much else to shout about. From humble beginnings this has become one of the most innovative and interesting bars on the independent scene in Birmingham.

2 thoughts on “Innovation at Indian Brewery”