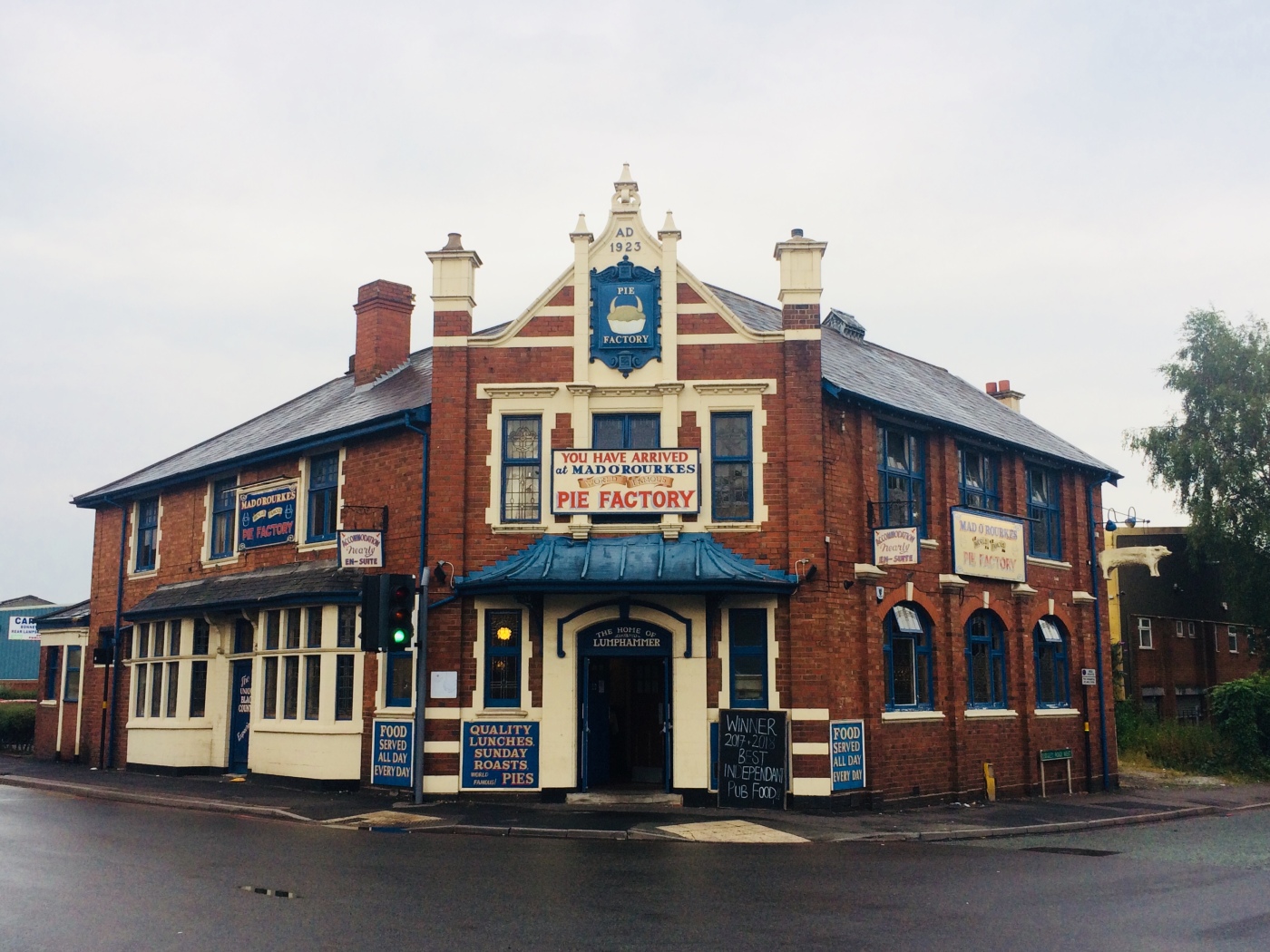 Apparently you get a certificate for completing the ‘Desperate Dan Cow Pie Challenge’ but the only thing I wanted was my bed. The satisfaction of finishing off the remaining morsels of the 4lb monstrosity that had presented itself at my table a good 40 minutes earlier was tempered by the feeling of having a medicine ball firmly lodged in my stomach. My initial excitement of visiting Mad O’Rourke’s World Famous Pie Factory in Tipton had dissolved into a daze, staring blankly into the distance wondering if I’d ever be able to summon the spirit to lift myself from my chair.

The evening had not gotten off to a good start. I’d always had misgivings about the Black Country but I felt it was time to challenge assumptions. I was sure that there were fine people in this misunderstood part of the country however passing through it on the train only ever filled me with gloom. The smokestacks and chimneys of what was once the beating heart of the industrial revolution two centuries earlier had been replaced by dour sloping roofs of corrugated iron for miles on end.

After weeks of uninterrupted sunshine – a bizarre occurrence for a usually deflating British summer –  menacing grey clouds were forming in the sky. Rain had begun to patter on the roof of Smethwick Galton Bridge station as the speaker announced that the train was indefinitely delayed. While waiting I was quietly impressed to note that this relatively small regional station on the outskirts of Birmingham offered trains to such far flung places as Liverpool, Hereford and Aberystwyth.

The rain was pounding down much harder by the time I reached the sodden hinterlands of Tipton and didn’t relent. I was relieved to produce the umbrella that I had solemnly packed earlier in the evening however it didn’t provide much shelter from the downpour. Trudging down Tipton’s main thoroughfare Owen Street I counted at least three Balti Houses, a Chinese restaurant, an Italian and the Victoria Chippy which proudly proclaimed itself to have been voted the ‘best chippy of the year’ in the local newspaper.  Two women and a child cheerily walked past me in opposite direction with no umbrella or other rain preventing devices and I immediately felt inferior to the grizzled folks who live in these parts.

Ten long minutes later I arrived at Mad O’Rourke’s World Famous Pie Factory and pleased to have made it to a place that had been on my radar for a while. It’s an impressive early 20th century red brick edifice standing proudly on the corner of a busy intersection and is no less enthralling inside. Pots and pans hang from the ceiling and the walls are covered in classic Irish pub décor and garish images of pigs. A large sign above the bar announces in jaunty big white letters that ‘if pies were a religion this would be its cathedral!!’.  The staff were friendly and smiling and a life size cut-out of Desperate Dan himself greets you at the kiosk where you order food.

After ordering Desperate Dan’s Cow Pie I took a place in the corner of the pub and bought a pint of Mad O’Rourke’s Honey Hammer honey ale for the reasonable price of £3.40. I audibly gasped when the pie was brought out. It was the most epic and intimidating pie I had ever laid eyes on, complete with pastry horns. I slowly hacked away at it like a miner swinging a blunt pickaxe, making dents but not really troubling the structural integrity. The warm hearty taste instantly made my plod through Tipton a distant memory. The generous chunks of steak and carrot seemed endless although I was also reminded why I have always disliked kidney. The menu however brands you a wimp if you order this behemoth without kidney and I couldn’t have my dignity tarnished by declining to have these vomit-inducing organs included. 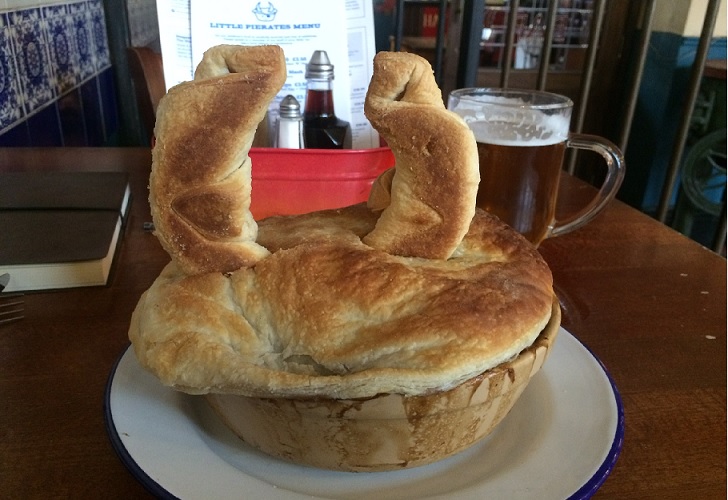 I also strongly do not recommend this as a date meal, as my face probably couldn’t have looked more sweaty and unappealing as I ploughed towards the finishing line. I had noble intentions of exploring the area afterwards, perhaps a walk around Dudley or finding another cosy Black Country watering hole. These had long since bitten the dust and the only viable option was the next train home and a well-earned lie down.

The rain had stopped as I heaved my body out of the pub and embarked on the slow walk back to Tipton station wondering if my stomach would ever return to its normal size. I couldn’t wait to go back.